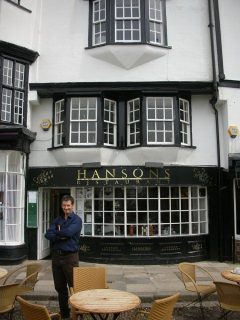 Set within a Grade II Listed property, dating back to approx 1530, and fronting on to Exeter’s Cathedral Green, Hansons restaurant and tea rooms has been sold to Ben Mangan one of the founders of the Boston Tea Party chain. Hansons was sold by licensed property specialists Stonesmith of Exeter on behalf of Andy Goodchild.

Ben is a highly experienced caterer and plans to re-establish Hansons as an old fashioned English tearooms and coffee shop which will provide an extensive menu and be licensed to sell alcohol. The business will close until 6th of May for total internal refurbishment and decoration and will reopen as “Tea On The Green”. It will offer fully waited table service with a new espresso bar for take out refreshments. The restaurant will be further enhanced by the installation of state of the art catering equipment.

He plans to enhance the character of the property and to open up, as a feature, the old bread oven which dates back to 1530. The restaurant will trade from 8am to 6pm Monday to Saturday and Sunday trading from 9am to 5pm will be introduced. The restaurant will be able to seat 70 customers including alfresco seating to the front, directly overlooking Exeter Cathedral.

Ben has secured the services of Fiona Were, who worked with him at the Boston Tea Party. Originally from New Zealand Fiona has an accredited career in catering including working as a training and development chef for Fifteen Cornwall in its first year. Fiona has created a new menu, written new recipes and is currently training the staff ready for the re-opening.

Wherever possible all of the produce will be sourced locally and will be free range and organic. The tea and coffee is being supplied by D J Miles of Porlock and includes an extensive range of teas, notably Jasmine Burst which looks like a flower opening up in the cup. Tea on the Green will also be a “no tea bag zone” and as well as the food and non alcoholic beverages being locally sourced, there will also be a selection of beers from the Westcountry.

“Having looked at the competition in Exeter, Ben identified a gap in the market for an old fashioned style tea rooms and coffee shop and is delighted with the purchase of Hansons, especially because of its high profile city centre trading position” reports Mike Phillips of Stonesmith. The leasehold of Hansons was sold by Stonesmith off an asking price of £95,000.