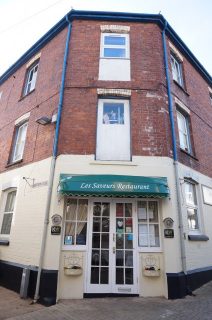 Stonesmith of Exeter are delighted to have sold the leasehold of Les Saveurs Restaurant; a high quality, award winning establishment located in the busy East Devon coastal town of Exmouth.

Set within character premises, which have been purposely equipped and presented to a high standard throughout, this well-regarded business boasts an enviable reputation and has won numerous awards and accolades during our clients 10 years of ownership, including 2 AA Rosettes. Using high quality, locally sourced produce, this attention to detail has ensured that the business enjoys excellent levels of regular repeat trade and an excellent local following. Not only from Exmouth but also from the surrounding towns and villages, together with a seasonal boost during the peak summer months. The business includes owner’s accommodation (including 2 double bedrooms, sitting room and facilities), the like of which rarely comes with a business of this nature.

The business was bought by Kerry Dutton and Nigel Wright, who both have a strong background in hospitality. Kerry and Nigel recently travelled the world for a year, exploring differing cuisines, which has had a great influence on their ideas. When they returned to the UK they decided to move to Devon.

They intend to continue to build on the success of Les Saveurs, by adding their own twist to the modern-European menu, using the very best fresh, local ingredients. Kerry said “we are really excited to have taken over the lease of the restaurant which will now be known as “Saveurs”. The restaurant is now open again, after a brief refurbishment, and we look forward to welcoming people from Exmouth and the surrounding area over the coming months”