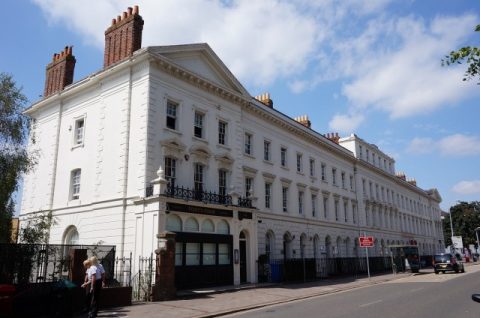 Property specialists, Stonesmith of Exeter, are delighted to have sold the leasehold of this stunning bar and restaurant, comprising of the four lower floors of a 6 storey Georgian Grade II Listed property in central Exeter. The premises form part of an imposing Georgian terrace – an impressive landmark building, easily identified by visitors to the city centre. The premises are situated in a prime trading location, fronting Queen Street, close to the High Street and main shopping areas and virtually opposite Central Station in the heart of Exeter city centre. The trading location also benefits greatly from both students and workers at Exeter University and Exeter College. Exeter itself is the regional capital of the South West and as such, is not only an established and expanding business centre, but also a popular tourist destination in its own right, year-round.

New owners, Adam and James Pike will be opening an exciting new concept in the premises. “Pink Moon” will replace the former champagne bar and restaurant and hopes to open its doors later this spring.

The Pike brothers commented: “With all of us being born & bred in our lovely little city we’re passionate about building local businesses up and supporting the little gems that make Exeter unique! We look forward to welcoming you to Pink Moon”

Mike Phillips, Director of selling agents Stonesmith said: “Despite Brexit and the current uncertainity in the economy, there is continued strong demand for catering businesses in Exeter and East Devon. Other recent sales in Exeter include Gulliver’s in North Street and Terry’s Café in Sidwell Street.”