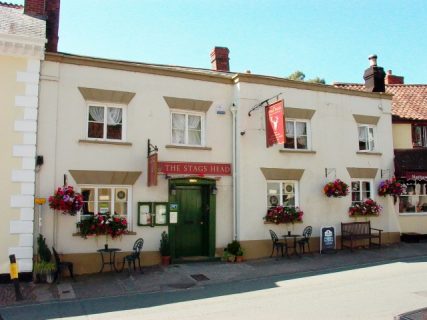 Situated in the popular medieval village of Dunster, within Exmoor National Park, in Somerset, The Stags Head Inn is a renown country village inn with a steady local trade and strong year round tourist trade. Having been is the same ownership for the past 9 years, the business has been bought by Terry Davey and Denise Perry through licensed property specialists Stonesmith of Exeter.

Terry and Denise have been coming to Dunster for many years and fell in love with The Stags Head Inn many moons ago. They own a holiday home in the village, and having taken early retirement, decided they needed a new challenge.

Overjoyed with their new venture Terry and Denise are keen to capitalise on the already successful business, to put their mark on the Inn and to continue growing the trade. They have been delighted with the response from the locals and the restaurant is fully booked most days. The inn also benefits from being in a strong tourist area and a destination location. Terry and Denise have been marketing and advertising The Stags Head Inn and have a website www.stagsheadinnexmoor.co.uk

A family friendly inn, the restaurant now has 48 covers and a slightly tweaked menu, including new specials, daily choices and Friday night fish suppers. To compliment the food there is a good selection of wines including a popular landlords wine choice from Terry.

The property provides letting accommodation which Terry and Denise have upgraded. They now have 3 en-suite rooms, having added an en-suite to one of the bedrooms, and a further bedroom with a separate bathroom.

Originally dating back to 16th Century The Stags Head Inn is a deceptively spacious Grade II Listed property, which over the years has been sympathetically upgraded whilst the original features and character have remained intact.

A private free of tie lease, The Stags Head Inn was sold by Stonesmith, who were looking for offers off a guide price of £79,950. Similar properties for sale can be viewed on www.stonesmith.co.uk and valuations can be arranged by calling 01392 201262.