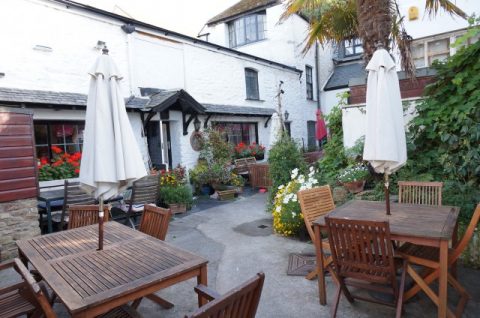 Trading as a well established and well regarded licensed cafe and bistro, The Courtyard in Looe, Cornwall, was sold in 2015 by licensed and catering property specialists Stonesmith of Exeter to Josh Geary of Zute Ltd, a local company with other catering outlets in the town.

The business boasts excellent levels of business and has recently extended and increased the trade by opening all day and for 12 months of the year. The Courtyard, with its excellent levels of trade and lucrative trading position just off the main thoroughfare in the centre of Looe, offers a popular menu including breakfast, light bites, lunch, locally made burgers, afternoon cream teas and evening meals. Ingredients are sourced locally from nearby farms and the fish and seafood is brought in on trawlers and fishing boats daily. The attention to detail ensures a regular repeat trade, which is boosted significantly during the busy holiday season.

The Courtyard is described as both a “hidden gem” and “a treasure” by customers to the town and it has been awarded a Certificate of Excellence and is rated No 16 out of 74 restaurants on TripAdvisor. By making use of social media, in particular Facebook, the business is promoted and advertised by word of mouth.

Being situated in the heart of East Looe, on the South Cornwall coast, considered one of the country’s most picturesque coastal towns, and having one of the most photographed harbour sides in the Westcountry, the town boasts an active fishing fleet which still operates from the harbour, and is a very popular holiday destination year round and particularly during the summer season.

The cafe/bistro provides a main trading area with seating for 36 + with customer welfare facilities and a fully equipped catering kitchen and various ancillary areas. But the real feature of the property is the attractive courtyard which provides seating for 24+ customers within an attractive patio style garden setting and access from Fore Street to the front and The Quay at the rear.

Full details of all our current businesses can be downloaded from the Stonesmith website www.stonesmith.co.uk and for anyone thinking of selling or wanting professional advice, Stonesmith can be contacted on 01392 201262.